Linda and Michael tie the knot at Rogerthorpe Manor

It was going to be another hot day! Linda was getting ready at Rogerthorpe Manor and when I arrived Laura Wilkes had just finished doing the girls' hair and Phoebe Paver was finishing off our beautiful bride's makeup, and she was looking amazing. A few photos of the four bridesmaids and little Freya, (daughter, flower-girl, princess for the day).The dress was looking good from Elite Bridal, I just needed to move some of the clutter to get a photo of it. Linda says she only went to one shop and tried on four dresses and fell in love with it. The bridesmaids' dresses were coral and came from Debenhams. All was going to time, no rushing, no stress. It is important to make sure the beauticians get finished early. Time and time again I have seen beauticians running really late and it spoils the whole experience. 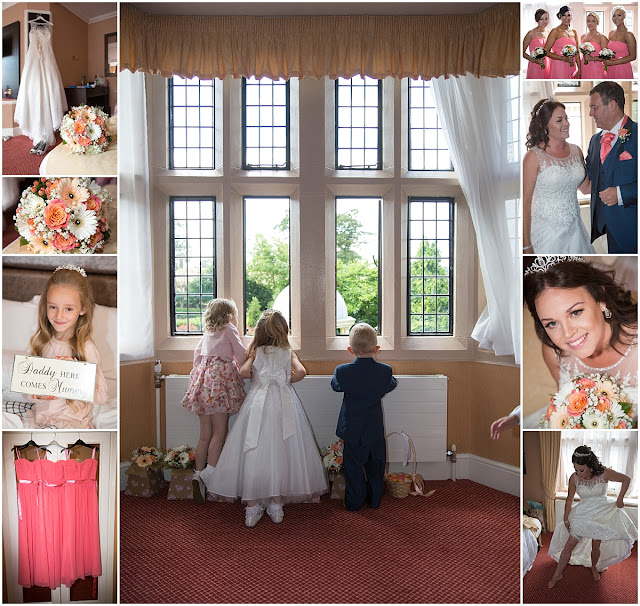 Ok, leave the girls to get dressed and off to see the chaps arriving. They turned up in a super-stretched Hummer supplied by All Stars Limousines. Plenty of time for photos and of course the rings being looked after by the Best Man, Wes. Both were white gold. Michael's had a single row of diamonds and Linda's had two. They came from Warren James and Argos. Linda says as soon as she saw them she knew they were perfect for them. The fellows wore blue three pieces suits from Topmark, with cravats and handkerchiefs to match the bridesmaids' dresses. They looked really smart. 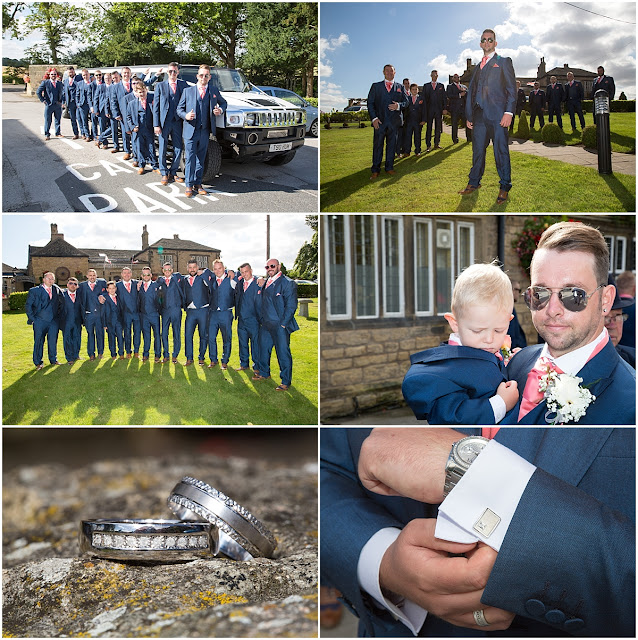 Back to see the girls for fifteen minutes or so. All dressed and looking fantastic. The flowers were here; a mixture of peach roses and white gerberas by Mrs Bouquet. Dad arrived. A few hugs, kisses and tears and all ready to go. I knew the registrars well. From Wakefield. One of the ladies had officiated at my own daughter's wedding. Really lovely, amenable people. The bride came in with her dad after the bridesmaids. So of course the ceremony went well with three readings by friends Claire, Daz and Bram. After the legalities the couple were greeted by their guests with cheers and handfuls of confetti in the back garden. 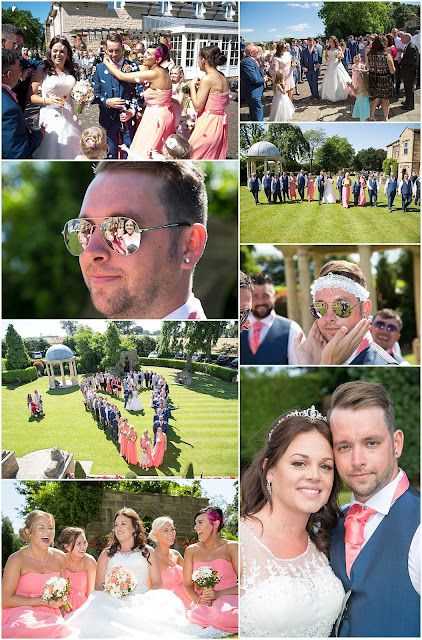 Linda wanted a heart shaped group photo taken from above and a few other groups. She also tossed a bouquet through the air to her girl friends. It was sweltering! Eventually I accompanied the couple into the breakfast room to get a few photos and of course the cake, made by a friend, before allowing the guests to enter. Linda and Michael chose Rogerthorpe as they say it is a beautiful place with amazing food. They often come for a meal in the Jacobean restaurant. Speeches and kind words were given after the breakfast. This was an early wedding so we still had all afternoon left and time for lots more photos. I encouraged the couple to go for a little walk. I am always conscious that I do not want to infringe upon their day but we had oodles of time so I think they were happy to leave the guests for fifteen minutes. We went into a wheat field and got some beautiful photos of them against a deep blue sky. They already had told me they don't feel comfortable being photographed but this certainly was not the case. They looked so at ease in front of my lens and now have some great memories of a fantastic day. Then to get the party started the couple danced to Tenerife Sea by Ed Sheeran. Music by Lee Booth from Prosound Discos. 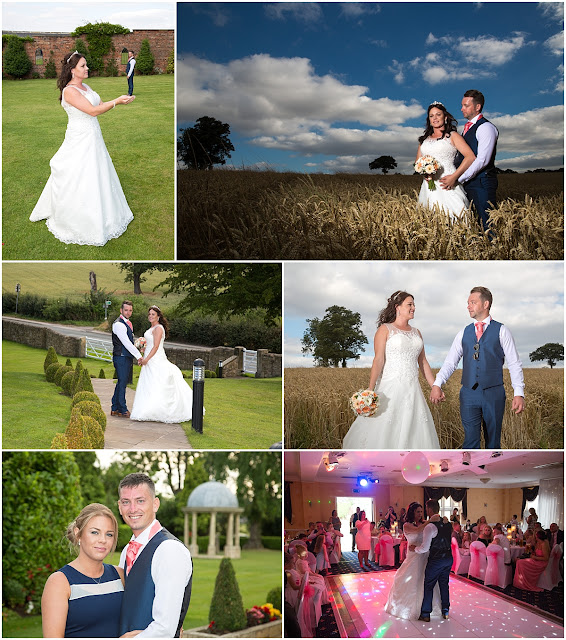 So Linda, how did he pop the question? It was thirteen years ago (Michael does not like to rush things), whilst out having a picnic. And what did the couple like most about the day? The ceremony did it for Linda - it was so memorable. Michael added that the reception and food were brilliant, good portions and staff were really helpful and could not do enough for you. Advice for others? "Enjoy every minute because it goes too quickly and try not to get stressed about things you cannot change".
Honeymoon will have to wait until next year until the bank account starts to recover! Tenerife here we come.
Labels: Rogerthorpe "Rogerthorpe Manor" Jacobean "Pontefract wedding" Badsworth