When Erin married Lee Evans sparks were sure to fly.

It was the last weekend in July and it was looking like it was going to be the hottest day of the year. Great for a wedding you may think but blistering sunlight can be a photographer's second worst nightmare - after rain of course! I was to meet the bride early up at the Hawkhills in Easingwold. It was a beautiful venue with a tree lined drive that seemed to go on forever. It was stunning. Erin was there with her parents, bridesmaid and flower girl all being prepared by Rebecca Shann from Tadcaster. Erin had collected photos from Pinterest for inspiration to show Becky how she wanted her hair and makeup. Erin says Becky offers a fabulous service and is amazing at her job.
I hung Erin's dress above the window in the bridal suite next door. The curtain pole must have been ten feet up! It was a gorgeous period room with oodles of finery and a very contemporary en-suite. The dress was a very elegant T-length with a lacy skirt. Maggie from Finery Bridal in Sherburn in Elmet showed Erin the dress and that was it, it had to be that one. She also had a full range of Dessy bridesmaids dresses with a full choice of styles and colours to match the blue colour scheme. "The service was personal, friendly and all round superb service", says Erin. The bridal flowers came from Melanie's Flowers in Tadcaster. "I've had flowers from there before and they've always been fresh and kept fantastically. The girls at the shop took my ideas and worked with them to provide really informal flowers that suited the look and feel of the wedding I wanted". 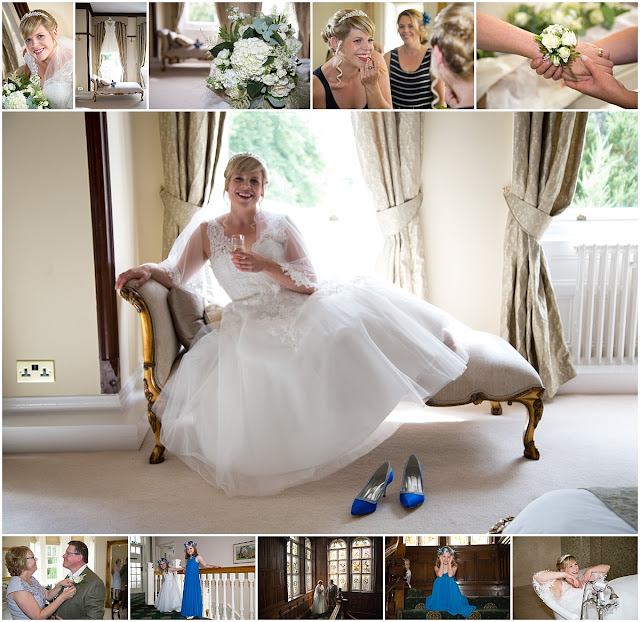 It was quite a journey to All Saints Church in Sherburn in Elmet. I always seem to be rushing and it wasn't getting any cooler even with the air con on full blast. Lee was having a pensive five minutes alone at the back church sat on a small bench admiring the vista to York and beyond. He was happy to let me join him for a while. He looked really dapper in his Tweed and Chinos bought at Moss Bros. That was a great choice as the chaps could wear them again after the wedding. Colour was right. I thought the tweed would be too hot but the jackets were deceivingly light weight. So where were the rings? Lee 2; aka Best Man, had them. A white gold band with a single stone for Lee and a diamond encrusted band for Erin. They had been totally personalised to the couple's specification by Forever Wedding Rings. The jeweller made a home visit making the choice very relaxed and an exciting part of the wedding planning. 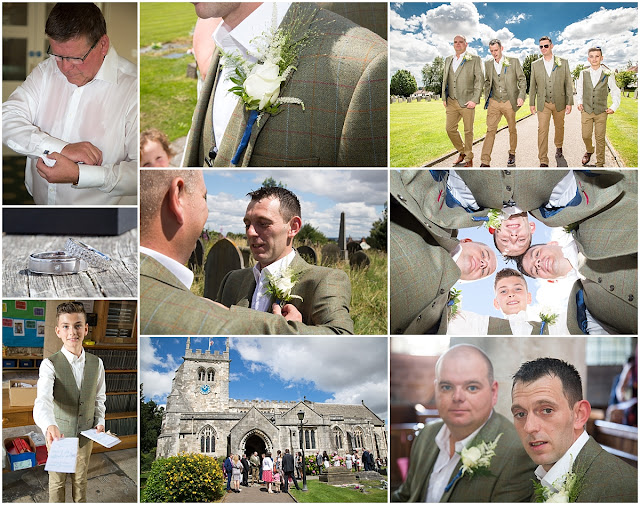 The bride was on her way. The bride and groom had been to a few festivals with friends and their beloved 'Edgar'. 'Edgar' was a VW Combi and that had to be the choice of transport. However poor Edgar coughed and spluttered for the last time the day before the wedding and was no more. So Erin made her way in a blue and white Comer van quickly seconded for the job.
The church was idyllic. It was Lee's family church. The service was really personal and thankfully cooler inside the church. After the necessary confetti and hugs and kisses it was off to Hawkhills for the Wedding Breakfast and reception. After visiting a few venues Lee told me this had to be the one. It had a mix of tradition and modern and the couple had it exclusively to themselves for all weekend. There were lots of kids at the wedding and this was a lovely, safe environment for them to run around in. After speaking with Maria, the coordinator, and the staff, Erin found them all so friendly and accommodating that it was an easy choice to make for her also. 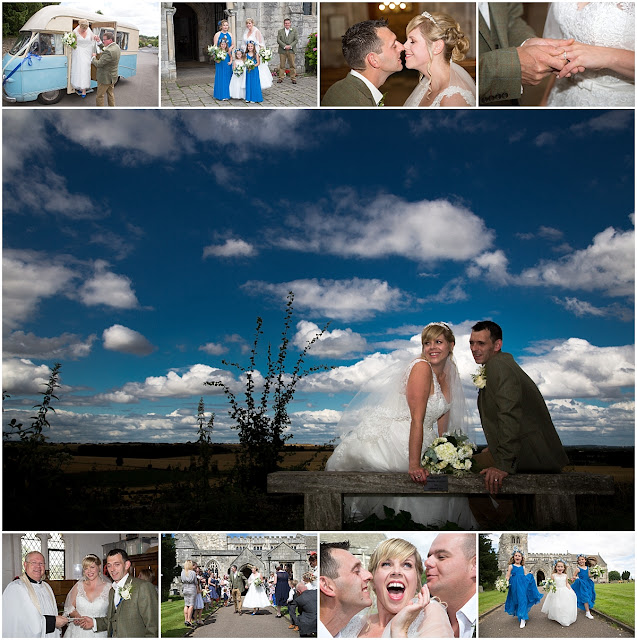 Speeches outside on the lawn! Followed by an amazing wedding breakfast and of course the wine flowed! Not to mention the cocktail bar on the lawn to keep the guests in the party mood. And the cake of course. It had to be Colin the Caterpillar from Marks and Spencers. All family celebrations had Colin as a central part so it was only right he should appear again, except this time he was joined by his new girlfriend, Connie! And if that was not enough a sweetie cart from Yorkshire Confectionery was stood for those with a sweet tooth. To round the day off the couple opened the dance floor early dancing to 'Shut Up and Dance with me' being sung by Duvet, the ultimate covers band. Lee and Erin - a bit lively - well there's an understatement. To be followed by heaps of vibes from DJ Chris Marsden. 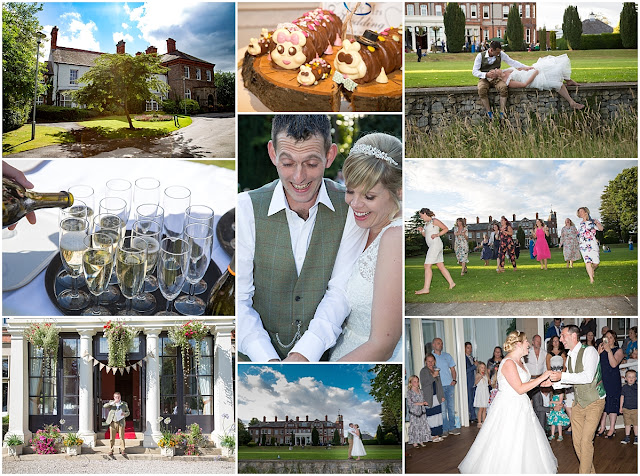 Erin told me that she met Lee about 6 years ago in a local pub, at a random evening just having a friendly pint. Lee was an electrician so it wasn't long before there was a spark between these two. Then at Christmas in the morning, just before their little girl woke up, Lee presented a gift bag with the big question there on its gift tag. Advice for others? "Just do what you want to do and only then start to consider your guests". What about shopping for the wedding? "I thought I'd found the perfect dress, but when I went to a local bridal shop Maggie persuaded me to try on a dress whilst I was there. She brought one out and that was it! I changed the dress to suit my style, which was no problem at all".
Is there to be a honeymoon? (Honeymoon btw was a period of 1 month that a fellow would abduct a girl for and hide her away, trapped, feeding her on honey. If she hadn't been found during that month then he could claim the right to marry her - she had no say in the matter - this was man's stuff.) No honeymoon though for Erin and Lee. They have just started a new business to keep on top of. However one of the fabulous friends booked them in a two nights getaway as a surprise and no doubt a couple of days relaxation won't go amiss.
Best wishes from us all here for a long and prosperous life and let the sparks keep flying!
Photographed by Robert from Altered Images.
Labels: Hawkhills "Hawkhills weddings" "York weddings"