Claire and Lee - at Tankersley!

A nice bright day, cool but no rain, and its off to Tankersley Manor. I am being spoilt; Tankersley is only 15 minutes away. First job would be to get the Photo-booth built and ready for the evening then off to see our bride. Even after 30 years I still have a few butterflies and I must have photographed the wedding at least ten times over during my sleep the night before! I was really early so I spent a bit of time chatting with Beverly Clarke as she was setting up the beautiful wedding cake. She told me she does it more as a hobby from her home in Mexborough rather than professionally but I must say the cake was a show-piece. So off to see Claire. She was looking good being made up by Jennifer Law as I entered the room. Her six bridesmaids were also there in their Jim-jams all giggly and quite excited. So a few shots to capture the overall feel. The flowers were amazing; mainly roses in different shades of pink supplied by Vicky Jackson (groom's sister and best lady). The bridesmaids' would have sprays of gypsophila. Then of course the dress from Elegance Bridal was hanging and looking very elegant. 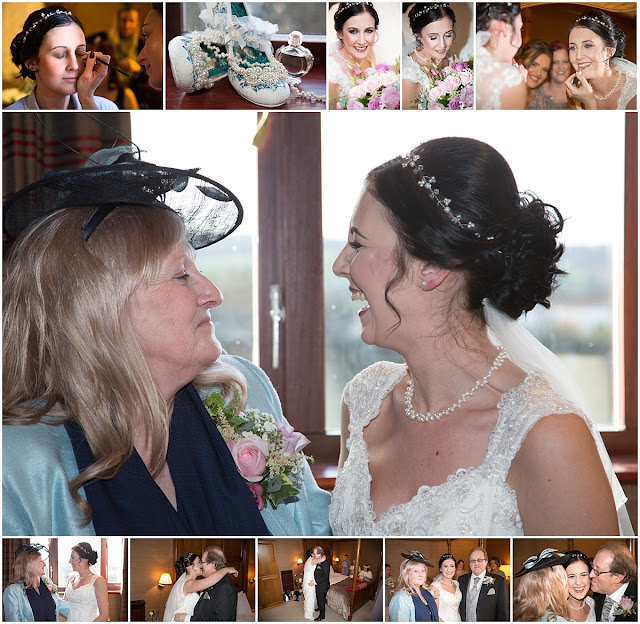 If the bride is at the venue I like to make the first visit brief as I can go back later once the girls are dressed and ready. So off to find the chaps (and chapess). Lee felt it right that his sister should be his main support and asked her to take on the role of Best Lady. Unfortunately his father was too unwell to be there and his mum was taken some time back so I suppose he was relying on his sister for support. They were just arriving and looking good. Vicky had the rings bought at Argos as a matching pair, both in white gold. I took a few photos and included the Usher - young Ben and Claire's dad, Kevin. The suits came from Alfred Angelo. 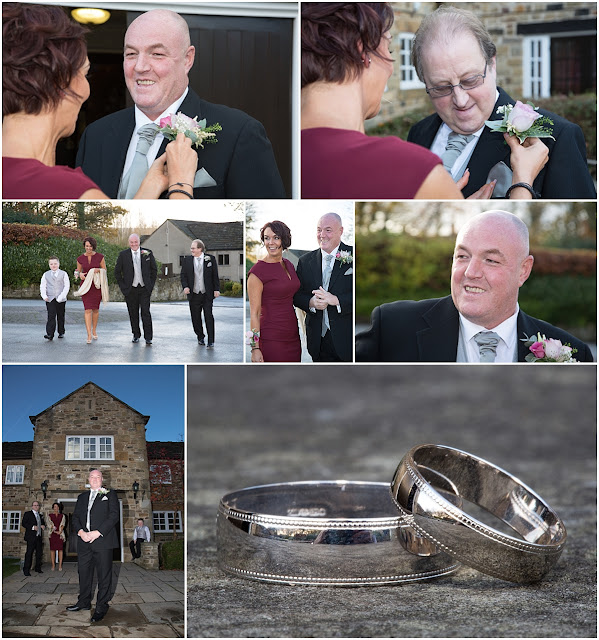 Back to see the girls. Wow - they looked stunning! The bridesmaid dresses were grey and quite fitted. Mum, Sharon was ready also looking really lovely in a dark blue dress with a turquoise jacket.Then dad appeared! Would there be tears? A few held back, trying to come through, but they all did very well! It wasn't long before Kaydie from the hotel gave the knock. "Are you ready to go?" The ceremony was in the Crook Barn. Claire loved it when she came for a viewing, and it did look amazing yet again. The registrars are the best! They allowed me to photograph and video from the front so I captured the procession arriving and of course Lee - in tears - overwhelmed by emotion as he saw his fiancee walking up the aisle! Claire said later this was her favourite part of the day, looking at Lee as she walked towards him. 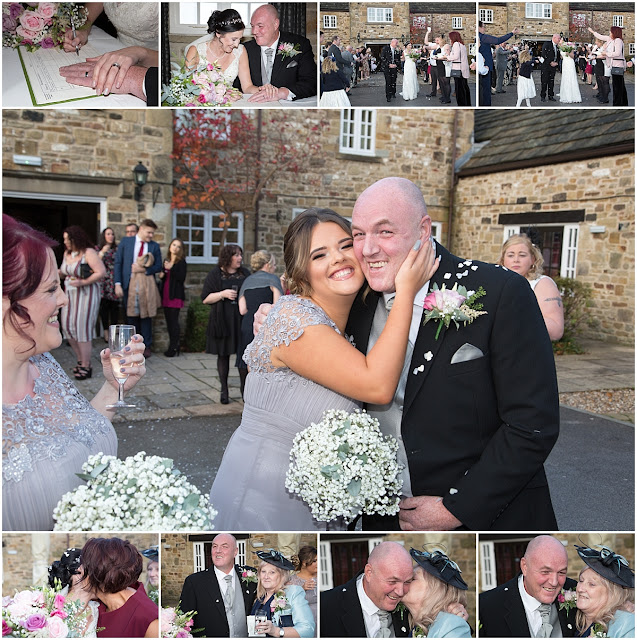 Plenty of photos outside. It was dry and thankfully quite mild. I don't remember hearing too many complaints about being cold! There were plenty of hugs, kisses and smiles. Isn't that what it should all be about? It didn't seem like 5 minutes until the wedding breakfast was being served in the large room. A nice size for the 60 guests. Stationery had all been handmade by the bride's sister and chief bridesmaid, Nicola Haywood. Speeches were first and very meaningful. A lot of emotion from Lee, kind words from Kevin and then the icing on the cake was the really heartfelt speech from Vicky. Lee must have been very proud. The food was amazing - perfect. Everyone commented on the atmosphere. It was brilliant; everyone was having a good time. 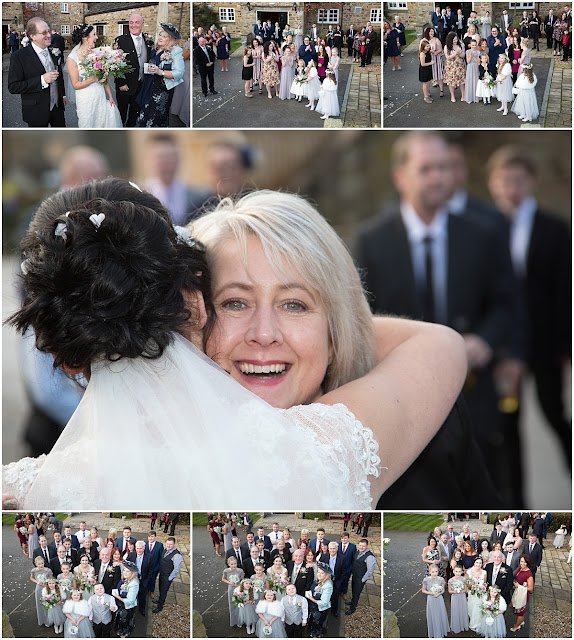 The evening reception was to start at 7.30. Michele was coming along to help to run the photo-booth.
It went down a storm, the guests loved it! Then first dance at 8.30 courtesy of James Arthur singing You Won't Let Go and played by the resident DJ. Some of the bridesmaids and their friends go to a dancing school and as a special treat they did a Flash Dance immediately after the first dance. This lifted the roof! 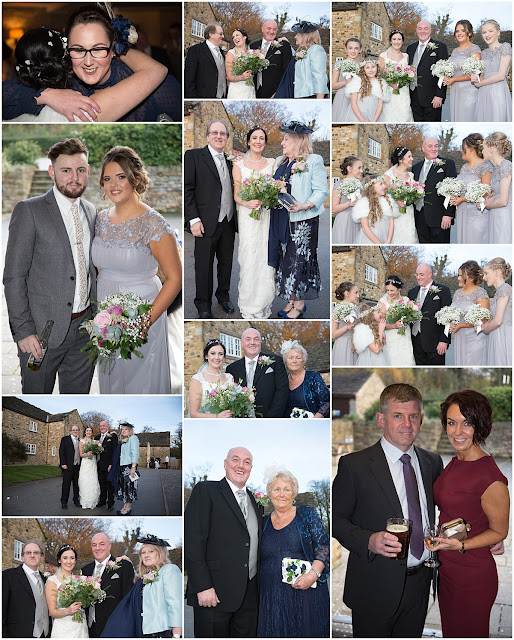 The couple met about 15 years ago in Nicola's pub. It wasn't long after that that Lee popped the question. Claire was racking her brains to remember how it came about! She told me that she was really looking forward to the day. She used Facebook to research shops for her dress but she ended up revisiting Elegance Bridal's page as there a dress there that was the perfect look for her. The day was amazing in every way. Claire's advice: Take your time to look around and make sure you get it how you want it to be and don't let others sway you. She thought she would be nervous being photographed but on the day she was just so much in the moment that there were no nerves and she just could not help but relax and smile! 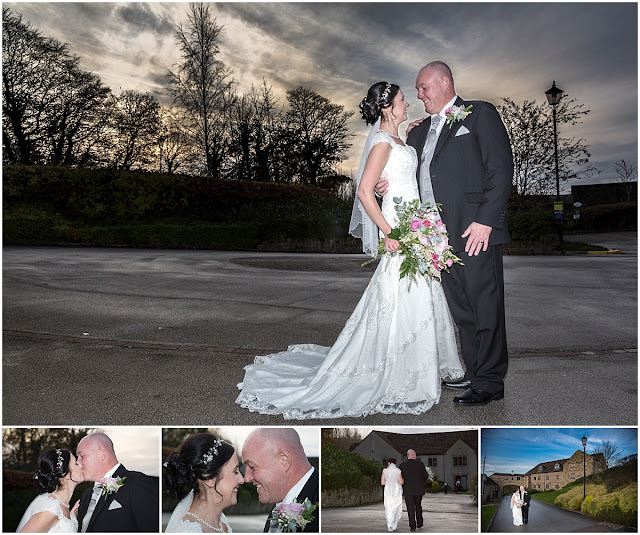 From us, Altered Images - a great big congratulations to the new Mr and Mrs Jackson. Wishing you all, many years of happiness together.
The final word comes from the young daughters - bridesmaids: