A warm welcome for new Mr and Mrs Bates

I love Ringwood Hall. It can be a dream location for photographers. The grounds and architecture are amazing. I was looking forward to seeing Tara again. She was getting ready at Ringwood Hall. It was one of those days where you don't know what the weather will decide to give us. It was looking a bit overcast and rain kept trying. Tara was in a fantastic bedroom suite; it was huge. Samantha Frearson and Louse from Bridal Creative were attending to Tara and her chief bridesmaid, Claire. The two younger bridesmaids, Alyscia and Megan were sprawled across the huge bed in the adjoining room watching something educational on the TV. Tara's dress looked very slender, hung up on the wardrobe door. It came from Strides. It was a lovely light-weight dress. The Chief bridemaid's dress was from Chi Chi London and the younger girls were ordered from Children's Special Occasions Wear. Weather was looking decidedly dodgy. But the bride looked gorgeous! She brought a tear to her Dad's eye when he saw her. Mum, Angela had already gone through the emotions with a few hugs along the way. The flowers looked amazing. Tara told me she had made them all herself. Silk with little jewels here and there. 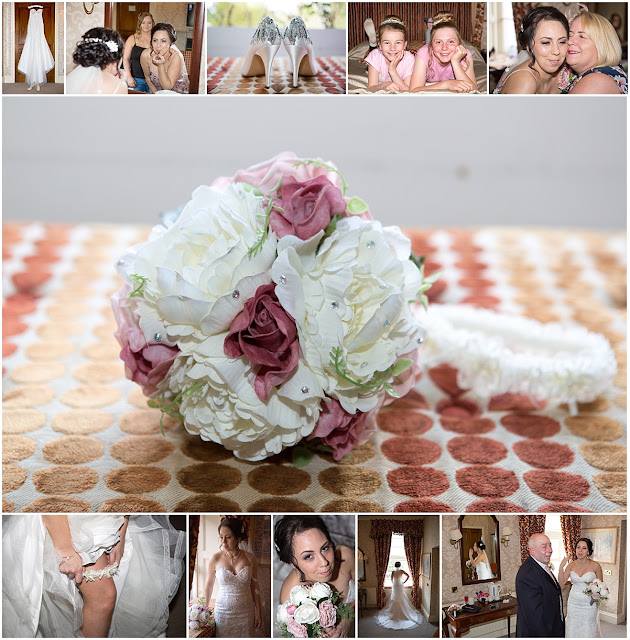 I had to leave them to see the chaps. Mark had already told me he only had a small family. Sadly he had lost his mum, who he was very close to, and I think he really wished she could be there with him on this special day. Still he had Stefan (bride's brother) there as his Best-Man, three ushers and two page boys, Aaron and Hayden. All looking very smart in suits from Youngs East Midlands Designer Outlet. The boys suits were ordered online from Children's Special Occasions Wear. Hayden, was to carry the rings down the aisle and had them tied to a cushion. I borrowed it to get a close up of them. The rings came from H. Samuel bought just at the right time as the jeweler had reduced the price by 20% during their special wedding event. They liked the shop as they were not pushy and they did not feel like they were being forced to buy. 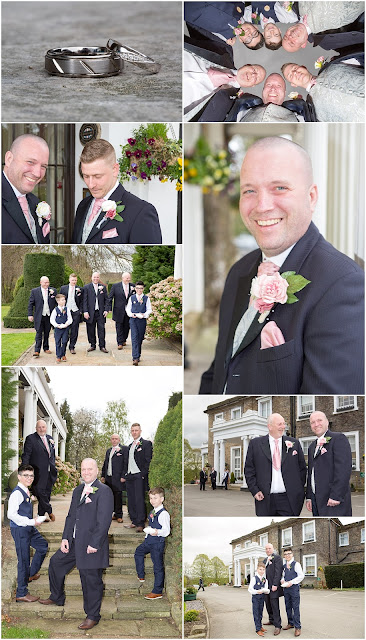 So why Ringwood? I suppose it was the obvious choice as the couple live nearby, but they both said they absolutely fell in love with it the moment they walked inside. Everything about the day was perfect from the start of planning right through to the day after the wedding. The food was amazing; the staff went out of their way to personalize the day and made the couple feel as if they were the only people in the world who mattered on that day. It was everything Tara had ever dreamed of. Old and timeless, with the modern twist that she really wanted. 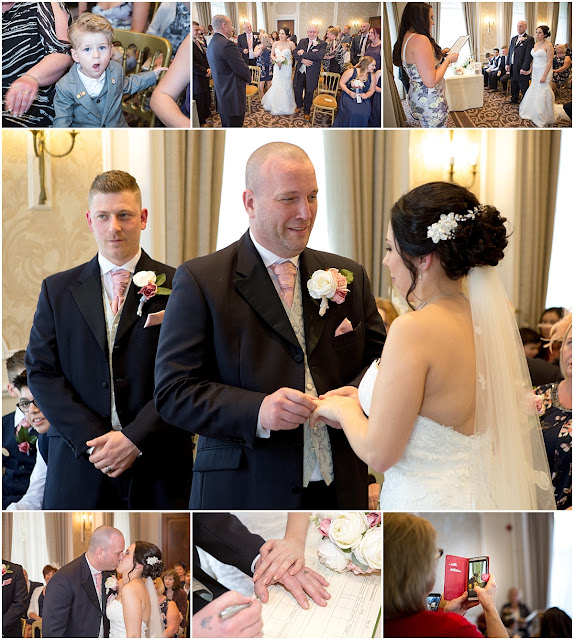 Lindon, he is a real gentleman at Ringwood, was panicking during the ceremony. He told me it was looking very stormy outside and was raining. Oh no! Just what we don't want. But like a miracle the clouds thinned and crossed their legs and let us get out on to the bowling green. Plan A was back on. Tara wanted a heart photo on the bowling green and I set up a guard of honour for them as they emerged from the conservatory. It was a rush! We were sure the clouds were not going to be forgiving for much longer. They were kind! We walked up to the rose garden and managed to get the photos they wanted. It was a bit cool but we coped. 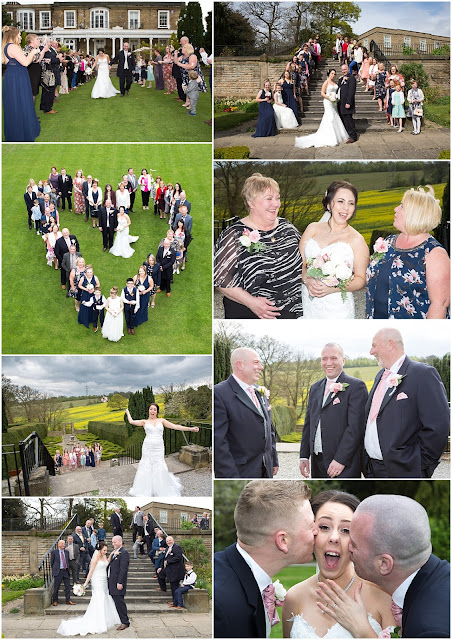 The coach-house was all dressed for the wedding breakfast. It looked stunning. Tara had made the table centre pieces with the help of their three children and a local park! She also made personal colouring books for the wedding breakfast and she had prepared a kids' table for the evening. This girl is so thoughtful. And of course the invites - you guessed it. And who styled the bridesmaid's and flowergirls' hair? You guessed it again! The only thing Tara couldn't manage was to play the keyboard during the breakfast. This had been organised by Ringwood, hiring Mark Briggs for the event. There was a ladies and a gents menu. Lindon was MC and he was a Godsend. It felt like he was our best friend looking out for us throughout the day. Speeches followed the meal and all three chaps had all prepared top speeches. The Best Man was very nervous and there was the pregnant silence when nerves initially gripped his tongue but once he was away he was brilliant with lots of kind words. Every child was give an Easter Egg - courtesy of ...... well of course! Next on the menu, a hog-roast but you would have to wait until 9.00pm for that. 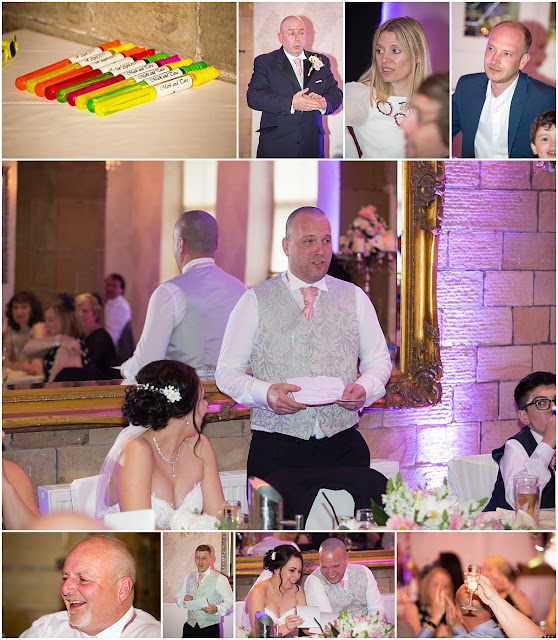 So, me being me, I wanted to know more about the newly weds. Mark was a Chef preparing special diet meals in a care home and Tara was a care assistant in the same home looking after dementia sufferers. They got to know each other and it turned out they only lived 5 minutes from each other. They both had children and they went to the same school and were the best of friend with each other without the parents even knowing. This sounds like a film script. One day following work Tara's bus was running late and Mark kindly offered her a lift home. Tara says she didn't like Mark much at first - a wannabe Gordon Ramsey - occasional blue words and cocky attitude! But when she got to know the true Mark it was the best thing she ever did. Tara says it really is true that you should never judge a book by its cover!
How did he pop the question? The two of them had been chatting quietly during the evening, strolling down memory lane, talking about childhood and growing up. Mark said he planned on proposing on Christmas Day but he said the time felt just right. He had the ring already wrapped in layer after layer of wrapping paper and in box after box. It took Tara 20 minutes to eventually get to it. So after knowing each other for four year they were now planning their future together.

Anyway back to the day! The couple opened up the dance floor with music by John Legend and Meghan Trainer; "Like I'm Gonna Lose You".  An unusual choice but the words really meant a lot to both of them as Mark has dealt with a lot of loss in his life and the two of them have both gone through some really tough and testing time individually and together so the focus of the song was that they would love and live ad if each day were their last. Being stronger by knowing they have each other. 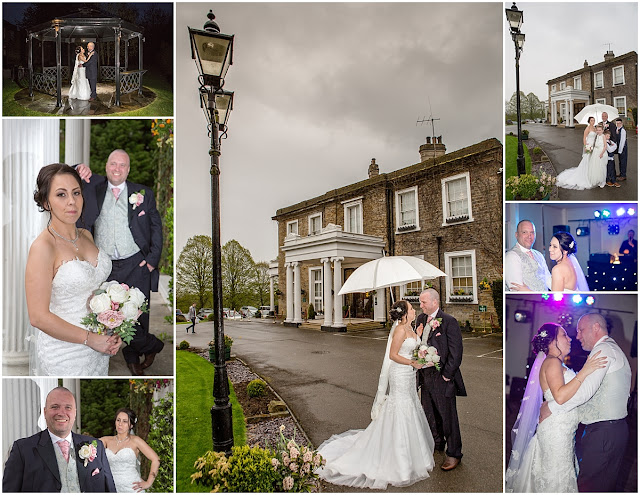 What was your favourite parts of the day?
Tara: It was walking down the aisle towards Mark and seeing his face as he saw me walking towards him.
Mark: It was seeing Tara walking towards me for the first time that day and seeing how amazing she looked. I anticipated the moment but it was so much more than I expected to feel.
The day was perfect! The best day of our lives. Everything leading up to that moment and all the stresses of planning was made all worth while in the end. Unforgettable.
Photos: I was worried about being photographed because I am so self conscious and hate being photographed. However on the day, I loved it and it didn't bother me one bit. I let myself go for the first time and I felt so comfortable in myself with Robert there to guide me. It was all very relaxed and enjoyable. I would advise that you make sure you are comfortable with your photographer otherwise I don't think if would work very well if you feel uncomfortable and not relaxed.
Advice for others: Don't stress over little things that don't matter. Focus on each other as that's all that counts. Do what you both want to do and not what others expect you to do. Follow your heart and your gut instinct and everything will fall into place. Enjoy every minute of your special day. Be a bridezilla if you want and be a bossy groom too! Its your day that you will remember forever so do it your way. Have no regrets.
So its off to Paphos, Cyprus just for a week of pampering in the warm laced with history if they have time for site-seeing.

PS. I wish I could do it all again. I wouldn't change a thing! It goes by so fast, so enjoy every minute. Oh and be prepared for bruised cheeks the next day! All that smiling really does take its toll!