Lindsey and Jamie have a beautiful summer's day wedding.

Peak Edge Hotel annexed the Red Lion Bar lies in open countryside near to Chesterfield in the Peak District. The hotel is ultra modern with amazing facilities and has the charm and character of the ancient bar. Lindsey was in the bridal suite getting ready for the ceremony and festivities. Carly Wainwright from Natalie Modoni Beauty Salon was doing the hair and makeup for Lyndsey, her five bridesmaids and her mum. 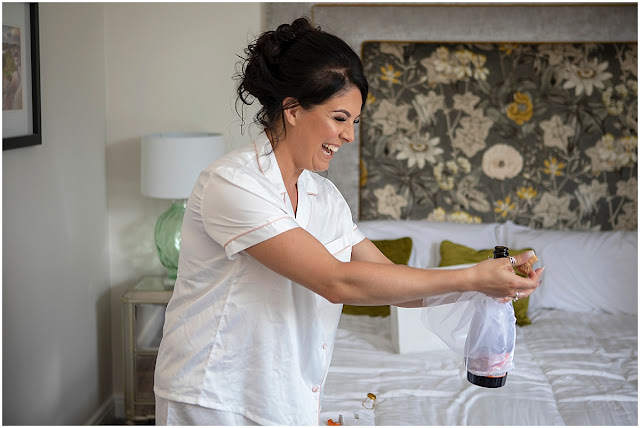 The dress was amazing hung on the curtain rail over the French doors overlooking the lake. The sunlight coming through was highlighting every detail. The dress came from Blushes Bridal in Sheffield. The bridesmaids were from Missguided. 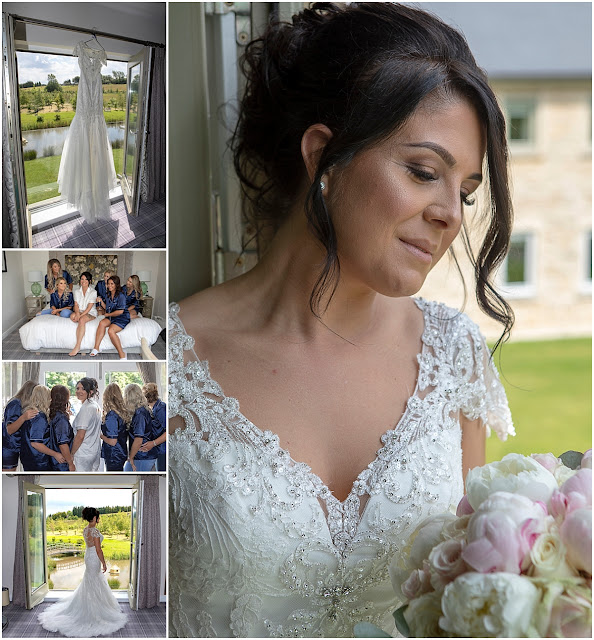 I spent about half an hour with the girls before going off to see the boys. Jamie was laughing and joking with his groomsmen and sons. Maybe to take away the nerves but most likely because he was a fun loving character! The two Page Boys looked like they had come from Securicor. Their responsibility was to look after the rings in two security cases! 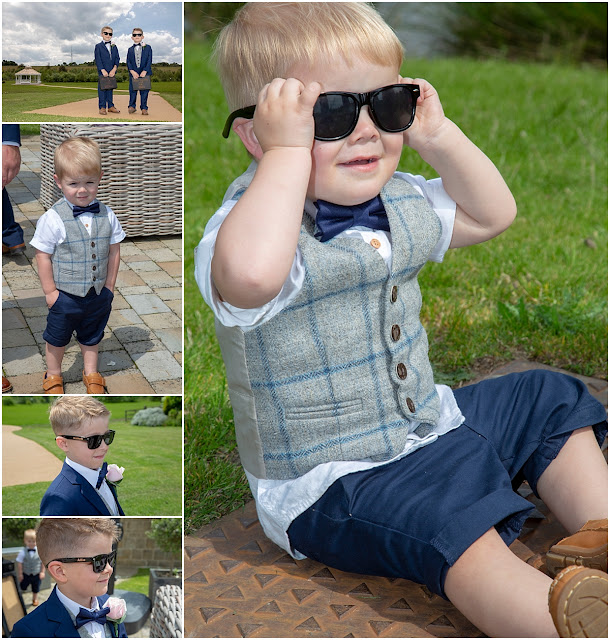 Rings were handmade by Tiargo. The suits were blue (of course - SWFC) from Reece Ford Suit Hire. Jamie had a tweed waistcoat and blue tie whilst the groomsmen were vice versa. 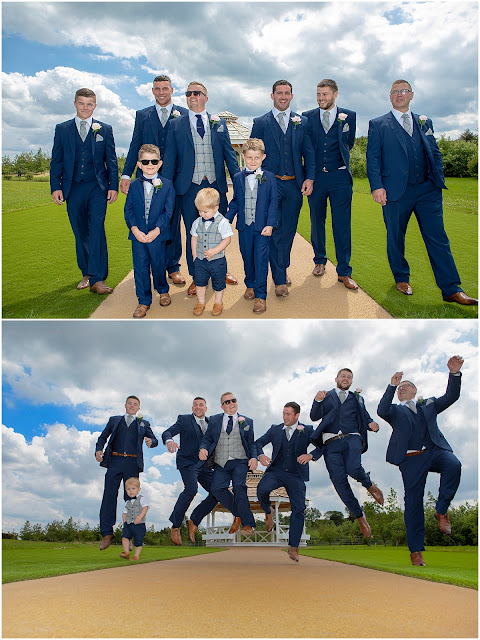 I went back to meet up with the girls. The flowers from Wilde Flowers had just arrived. They were a mixture of white and subtle pink roses and magnolias for the girls and pink roses for the chaps. Lou and Seb from Gill and Gee Media had arrived and were videoing the wedding. I asked Dad to follow after around 10 minutes to just allow me to get some beauty shots then sure enough he came in with his Kleenexe. His daughter looked stunning - smiling, happy and what looked like no nerves. 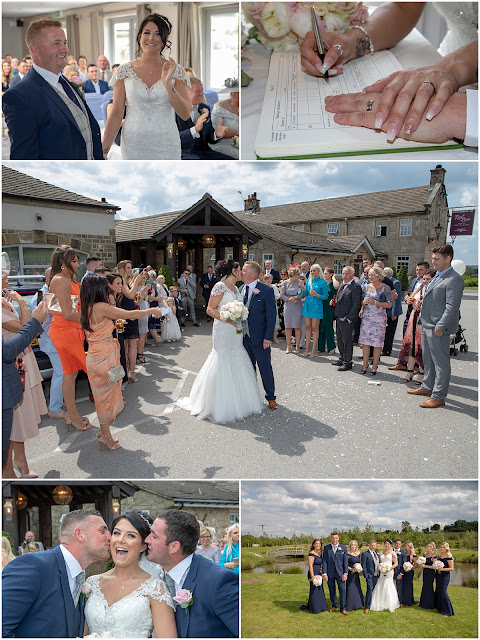 The ceremony went like clockwork. The ceremony room was amazing, dressed by the venue and lovely and bright from sunlight streaming through the large windows and huge roof light.
We arranged a guard of honour at the entrance between the old and new builds. There was a lovely covered walkway with oak beams and modern hanging lights leading out to the car park. Lots of confetti! Then it was a short walk around to the marvellous gardens and lakeside. 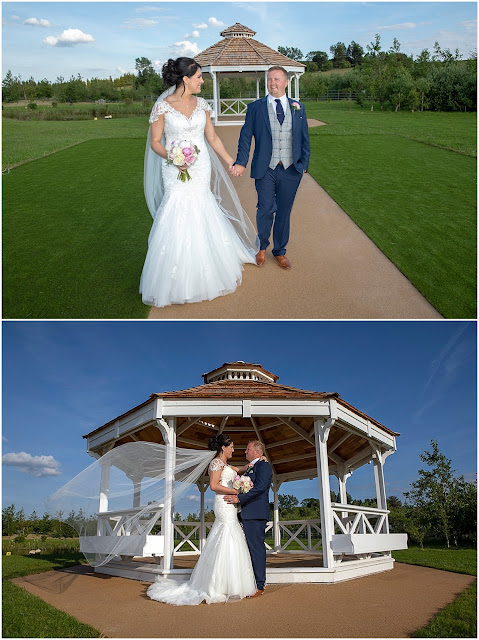 We took loads of photos! The grounds are a dream. A huge lake with a little, wooden bridge and a new pavilion which is used for ceremonies also.
The wedding breakfast went well. Stationery had been made by Designs by Daykin and balloons were from Lavish Balloons. 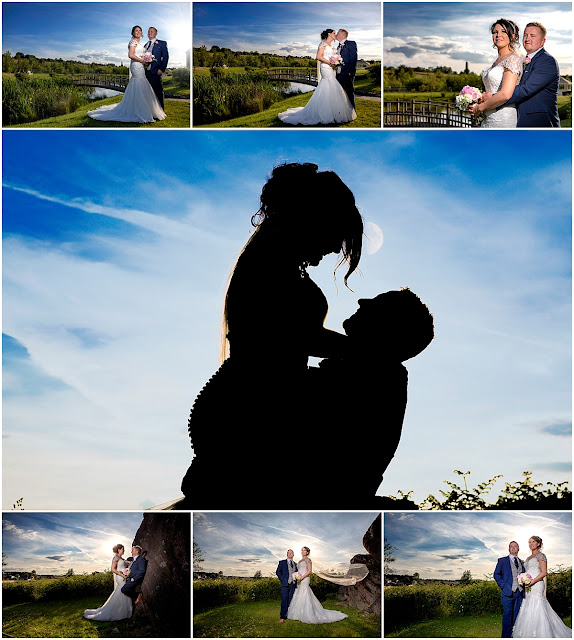 Lindsey and Jamie were young sweethearts, getting engaged when Lindsey was 18. She told me Jamie turned up at her work one day out of the blue, got down on one knee and that's how it all started. She went off with her girls to have her hen party in Marbella whilst Jamie went off to Albufeira with his boys for his stag do. 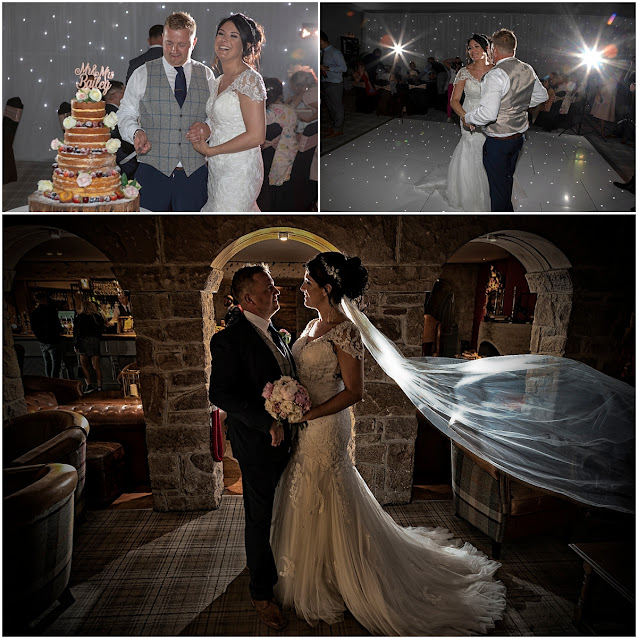 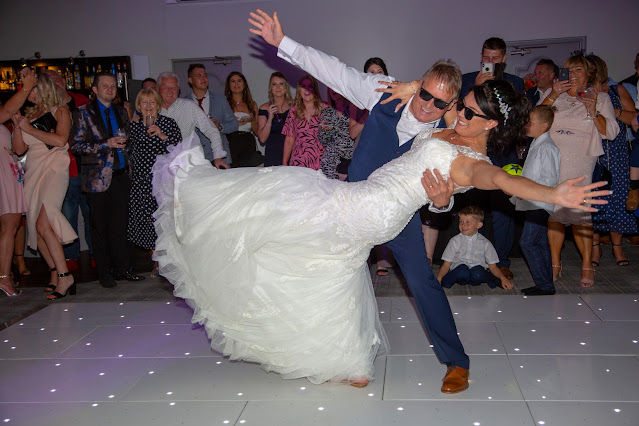 I wasn't sure if Jamie would be happy to have a few twilight photos in the evening as I could see he was keen to chat with his pals but he went for it. We got a few photos around the grounds and across the road there is an enormous rock with views out to the west to get amazing sunset photos. And that was the end of a beautiful day! Wishing them all the very best.
Labels: Peak Edge Hotel Red Lion