Liz and Luke have a summer marquee wedding.

A proposal with a twist to be followed by a truly “Made in Barnsley” wedding for Luke and Liz. It was almost eleven years ago when Luke got their daughter to ask Liz if he could marry Mummy! They started planning the wedding soon after and agreed that they would have a marquee in a field at Luke mum’s farm. They loved the idea of having something different. Also, a church wedding was felt important to them both.

They were a bit worried as the wedding got close as the weather had not been good. In fact, there had been extensive flooding and rain the weekend before. A soggy field was not what the doctor ordered. On the day, the Sun was smiling for them and the surface water had dried up. 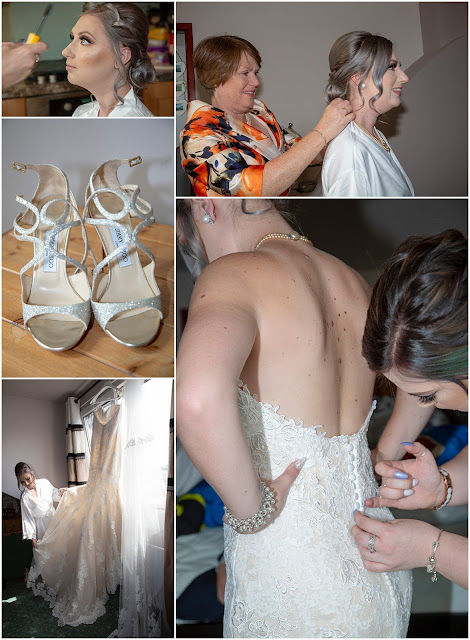 Liz was getting ready at her mum’s home in Wombwell. LaurenVickers was doing a good job with make-up and Carly Turner was styling the hair. Liz had a bespoke dress and veil from Dotty Taylor Bridal. She tried numerous dresses on and was delighted with the service after having a horrendous experience at another bridal shop. This shop was perfect and not pushy at all. The dress felt simply perfect. It was white, off the should and with lots of embroidery. The bridesmaids had blue, lilac, and pink dresses from JJ’s House. 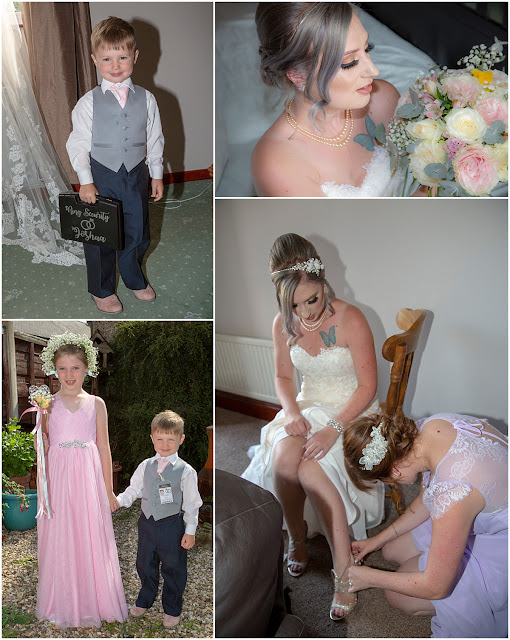 Liz carried a bouquet of white and pink roses set in lots of greenery with one small yellow rose that had special meaning to Liz. The bridesmaids were similar, just slightly smaller. Unique Wedding Flowers had made a fantastic job of providing all the flowers exactly as Liz as requested. 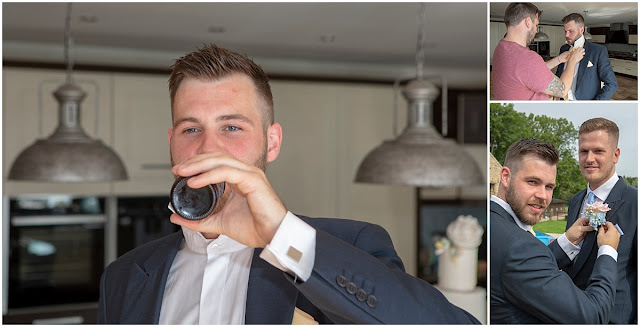 Meanwhile the boys were getting ready at Luke’s mum’s farmhouse where the reception would be held later.  The best man had remembered the rings, fortunately. They were from Kingston Jewellers – a local company with great prices. The suits were grey with light grey waistcoats all from Cupid Connections. Claire at Cupid Connections really is superb and makes sure everything is perfect. The jackets had tails and were a good choice for these slim chaps. Ties and buttonholes were yellow again, unusual for a late summer wedding. A Ferrari had been booked as a surprise for Luke to take him to church with his best man but there was a problem with the car, and it could not be supplied. Fortunately, Luke’s mum allowed Luke the use of her prized Bentley providing he was careful with it! 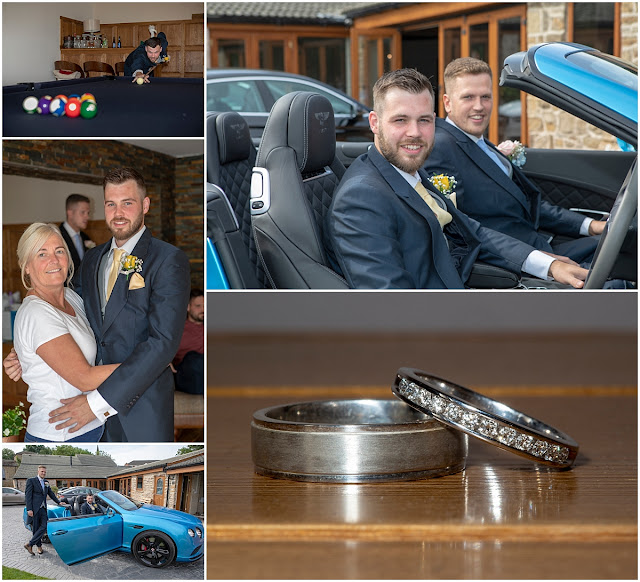 The ceremony was at All Saints’ Church, Darfield. CPWchauffeur company supplied a lot of transport for guests; many of whom had travelled quite far. It was an opportunity to meet lots of people not seen for some time. The church had special meaning as it is a beautiful setting and is where all of Luke’s family had married. 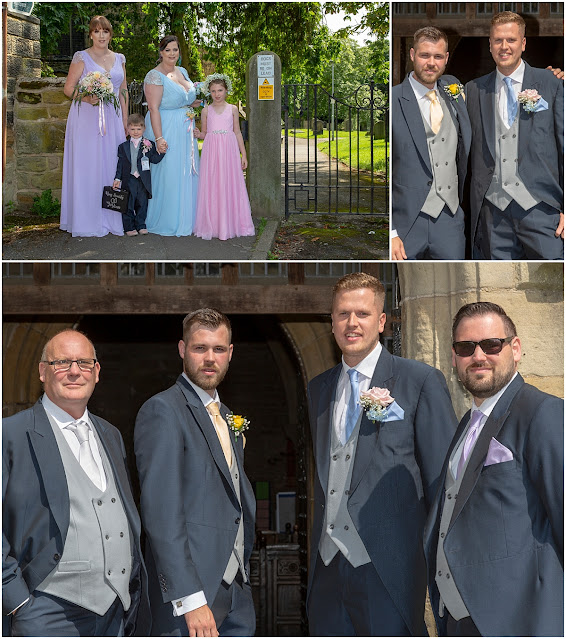 After lots of kisses, best wishes and of course a guard of honour with lots of flower petals flying it was off to the reception. It was exactly as the newly weds wanted. They could make it exactly how they wanted. Liz loved the drive in the Bentley with Luke at the wheel, feeling like Lady Penelope with her own Parker – just the two of them! This was her favourite part of the whole day. 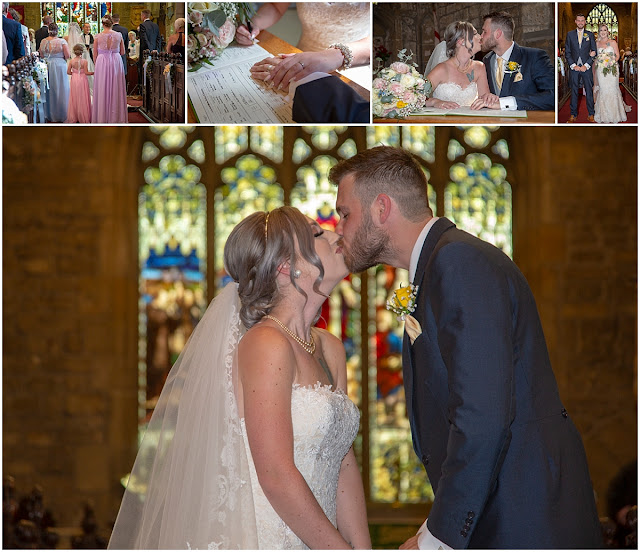 Guests were treated to canapes and drinks on arrival. The weather was glorious, and everybody had worked so hard to make the day special. They were so lucky as heavy rain and more flooding was due the following week also. 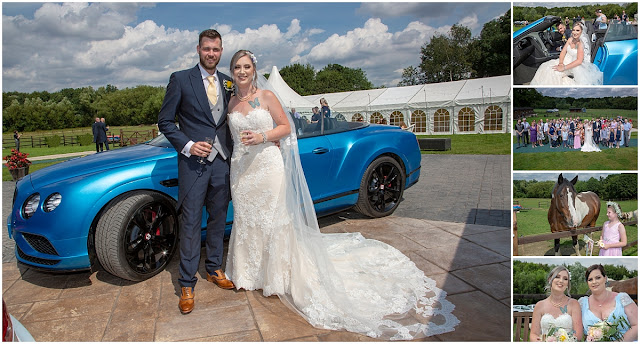 The marquee had taken most of the week to erect and get exactly right by Black Cherry Events who also provided all the furniture. A bar and drinks reception was provided by On The Day Supplies who made sure the guests were well attended to. F4D Events supplied all the amazing catering. They even provided Henderson’s relish to remind guests where they were!

The caters looked after the guests well with plenty of canapes whilst photos were being taken. Then it was all inside for a fantastic three course meal. There were choices with vegetarian and special dietary needs catered for. The cake stood proud on its on table. Three tiers, mainly white with white roses produced by Marija’s Cakes. Speeches went well with Luke’s mum giving a special speech of her own to add to Liz’s father’s, Luke’s, and the Best Man’s. 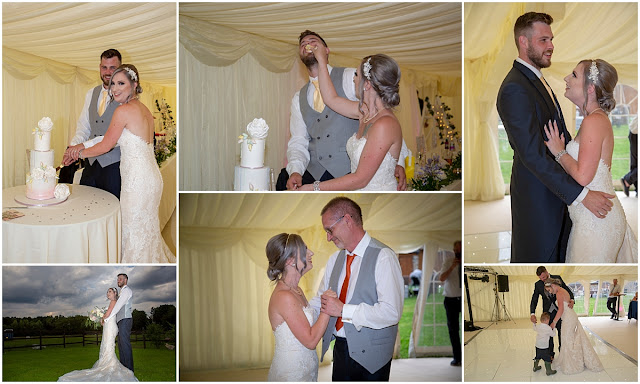 There was plenty of time to relax, enjoy the Sun and the farm grounds before the evening festivities.

Before the wedding we met with the family and Liz and Luke were certainly not afraid to say exactly what photos they wanted. Liz said after the wedding that she got everything exactly as she wanted often without them even knowing. On the morning of the wedding she suddenly thought of other photos she wanted as moments arose and asked for them to be done. She says nothing was too much trouble for the photographer.

Then it was time for the evening festivities. The first dance music was played by Christina and Harry Acoustics. It was Won’t Let You Go by James Morrison. You’ve Got A Friend In Me for a family dance and Daddy’s Little Girl for a father with daughter dance. SDN productions played music and kept guests entertained for the rest of the evening. Instead of a buffet, they had cheese toasties, bacon rolls and jacket potatoes. The catering staff took them around the guests making sure everybody had plenty and without having to queue up. All guests commented on how much they loved it. 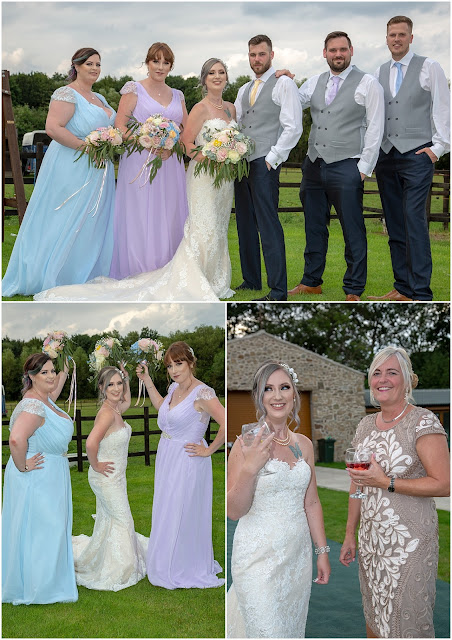 So, the day started and ended well, and a jolly good time was had by all. Next to look forward to would be a honeymoon. The couple had booked cruise in the Caribbean, but it was unfortunately cancelled due to the Corona virus epidemic, but they did manage to snatch two days in Spain just after the wedding. Hopefully, the cruise will still happen, just a little later than planned.

Liz and Luke have some advice for others following their planning.

Remember the day is about the two of you. Don’t worry about what anyone else wants or does. It will turn out exactly as you hoped. Make sure you get five minutes at some point during the day to sit with your new husband or wife and just talk. Say how much you love each other, whilst no one else is around. Just soak it in. You’ll be so busy that you may not speak to each other again after saying your vows!