Natalie & Glen have a day they will never forget!

Our very own Natalie was getting married! She asked to see all the venues I like for ideas of where to get married to her Glen. We went to Waterton Park - Walton Hall first. "That's the one. I don't want to see anymore. I love it". So that was it - Glen did not get a say in it! It is a glorious setting for a wedding. Former home of the eccentric Charles Waterton. Stories of his colourful life are fascinating and a BBC programme Pain, Pus and Poison described some of his antics.
So the morning of the wedding arrived. It was a mild and cloudy May day but hopefully it would stay dry. 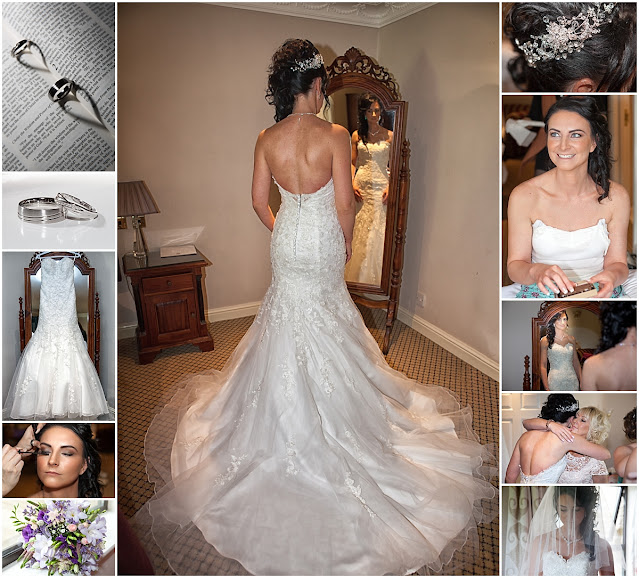 Natalie was having her hair and makeup done by Kerry Morrell. I told Natalie Kerry was the best and she is great for me to work with, making ladies look stunning, but natural and she doesn't waste time. She also had bridesmaids Toni and Taneesha to do as well as mum Michele and nan Brenda.
The bride's dress was hung up. Natalie went to Northallerton to the Bridal Factory Outlet for it. It was a Ronald Joyce and she had seen the same one in Sheffield for almost £1000 more! She had it altered to suit her. It was a fishtail! Natalie said a fishtail would be her last choice but she fell in love with it and it looked amazing. Bridal Affairs supplied the turquoise bridesmaids' dresses. 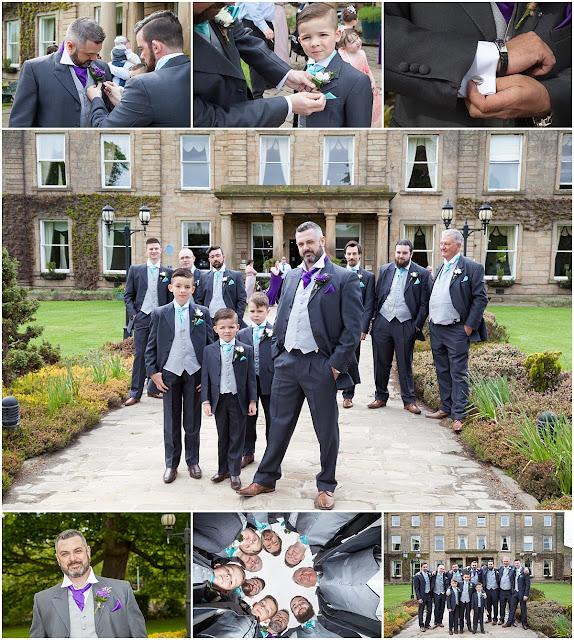 I left the girls alone to catch up with Glen and the lads. Our good friend Gemma Hague was taking lots of photos. They had been to the Turkish barbers and they all looked really good suited and booted instead of jeans and T shirts! The suits were grey with light grey waistcoats from Ashley Rogers Groomswear. Best Man, Ben had the rings supplied by H. Samuel. So a few photos and a few drinks in Charlie's Bar and I was back to see the girls, ready I hope. 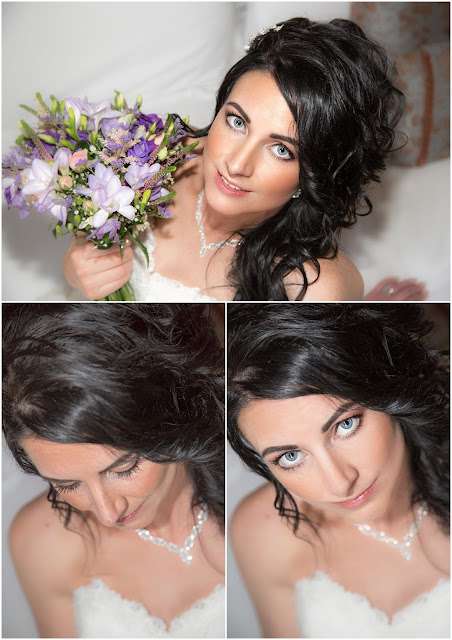 Now, I have seen a lot of brides but when I saw Natalie she really did bring tears to my eyes. There was no forcing them away and I had all on stopping her roaring for fear of having to get Kerry to redo the makeup. She was so slim, so beautiful and was a match for any princess in that dress! Flowers had arrived. The bouquets were simply gorgeous. Natalie's had different hues of lilac freesias and the bridesmaids had mainly white freesias. The smell was delicious. West End Flowers had really made these exactly as Natalie wanted and could not have been better.

It wasn't long before guests were being seated in Waterton Park Hotel assisted by Natalie's brother, usher, Nicky. Manageress Pauline was also busying making sure everything was just right - she is a perfectionist. Then the ceremony itself. Glen had chosen the music. Modern classical, excellent. A few nerves but everything went really well. The couple were given special treatment by the Wakefield registrars who always are amazing. 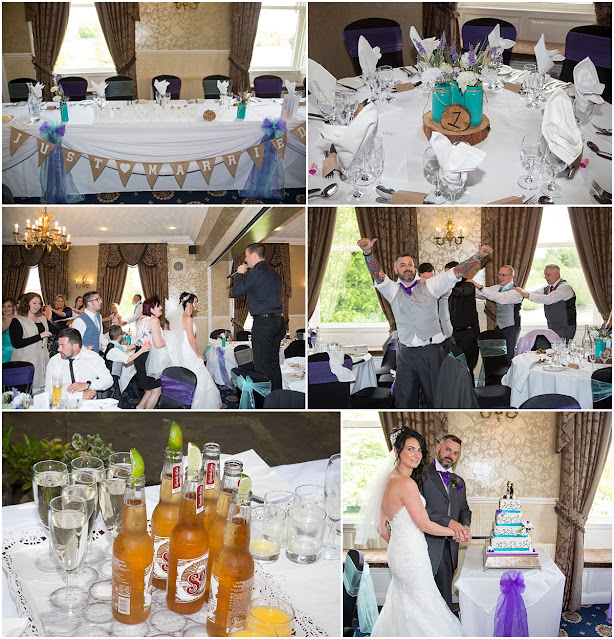 We arranged a guard of honour with confetti outside the hotel and then it was across the bridge over to the island for drinks, canapes and a few photos before the wedding breakfast. The breakfast was served in the grand dining room on the first floor in the Hall. The room was stunning, mainly turquoise. Natalie had made all of the centrepieces herself. The food at Walton Hall is outstanding. Speeches went well and then there was of course the cake cutting. Glen had a friend make the cake and she certainly had excelled. There were four iced tiers, all different, finished with turquoise ribbon and freesia iced flowers. As a surprise the Best Singing Waiters appeared before the dessert and had everybody on their feet dancing! Not even Michele, bride's mum, recognised them as they kept topping her champagne up (deliberately I think). Michele has worked with Jamie and Danny many times at different weddings! 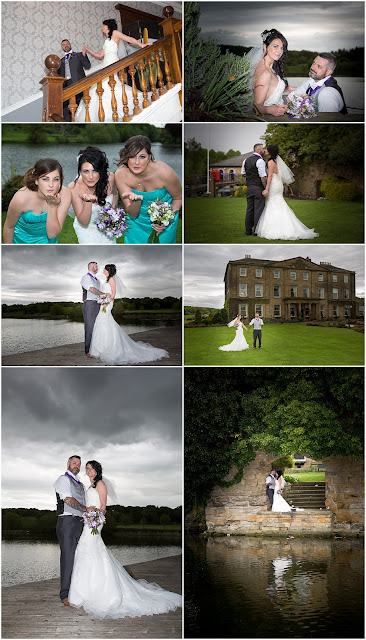 There was then plenty of time to enjoy the grounds and a few drinks of course. This is the most amazing venue, with open views across the lake and the golf course without a car or building in sight. 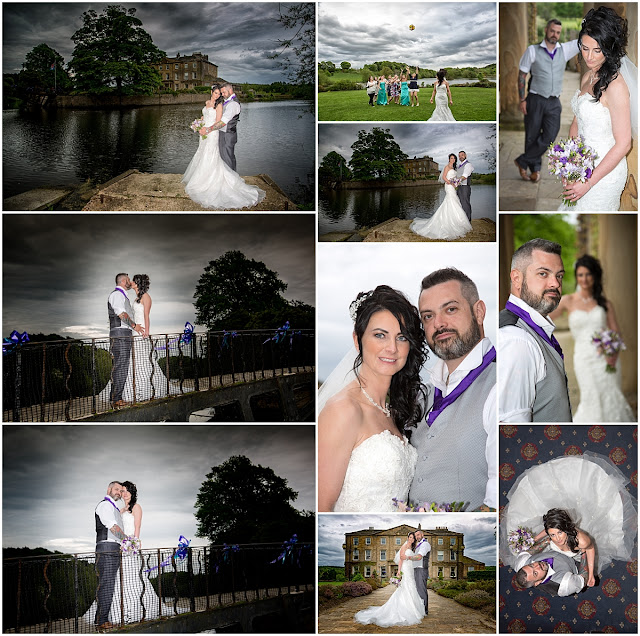 The evening reception was in the Boat House beneath the Hall on a level with the lake outside. The Best Singing Waiters did a short set then the First dance was to Jack Johnson - Better Together, and Natalie danced with me to Heartland - I loved her first. The DJ, Shane,  plays all the right music and has the most amazing lighting set up with lasers and with the dry ice machine the dancefloor was on fire. A fantastic barbecue was provided outside on the patio that overlooks the lake. A few spots of rain didn't spoil anything.