Rustic charm all the way for Kerry and Martyn

A lovelier couple would be hard to find. A bit quirky in their ways but so polite and honest and humble made them so interesting. It was going to be a pleasure for me to join them on their special day that they had been planning for almost six years. The two of them had met through a mutual friend and it wasn’t long before Martyn got down on one knee at the exact spot that they first met whilst out for a walk in Sheffield City Centre. I was determined to get the photos possible for them and their guests.

Kerry was getting ready at home. She had two bridesmaids and her parents with her. Her dress was hanging on a rail waiting for Kerry’s sister to finish doing Kerry’s makeup and then would be the fitting. WeddingVows at Hellaby had supplied the dress.

"I just called into the shop on the off chance and managed to get an appointment, picked some dresses I thought I liked. The owner of the shop picked one of her choice too, I tried that one on first and the rest were forgotten about, it was perfect, I didn't want to take it off."

Paula and her team are dedicated to helping to make all brides’ days something special. It was white with shoulder straps and mainly taffeta with some detail around the top. The bridesmaids had light mint dresses bought from JJ’s House. This is a very popular on-line shop specialising in gowns for all occasions.

Kerry had been to Maltby early in the morning to have her hair done by Donna at Styletto. Then it wasn’t long before the flowers were being delivered by Occasions. Three bouquets of beautiful white roses. I stayed for a short while just to see Kerry’s father's reaction and tears as he saw his daughter looking like a princess. 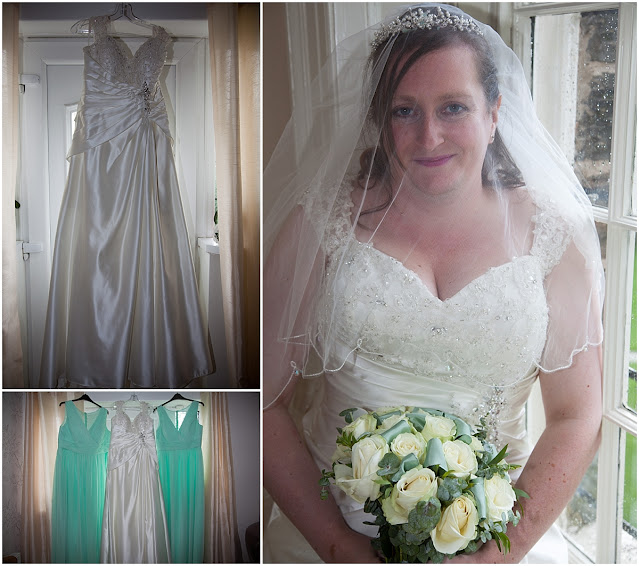 I met up with Martyn and his groomsmen and page boy in the City. They looked smart in their pewter grey suits with mint accessories bought from Marks and Spencer. The page boy’s suit was from Olivers in Meadowhall. He had a little wooden case to keep the rings safe. The rings were simple, yellow gold bands that appealed to the couple from Warren James. 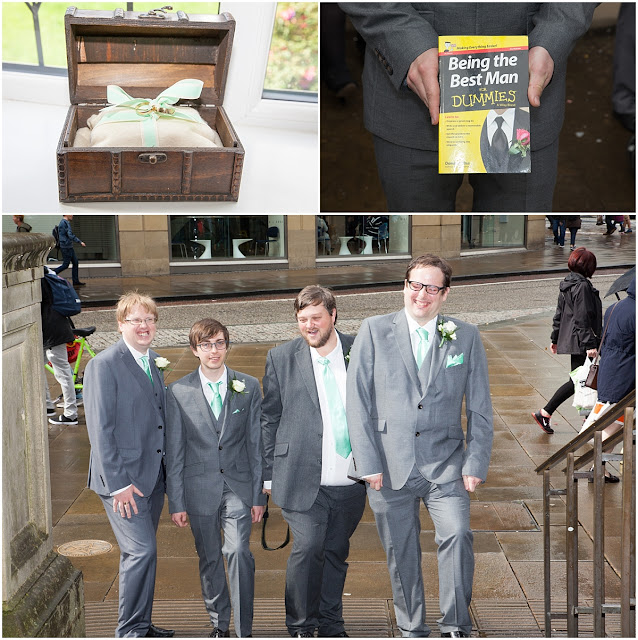 The chaps had to get inside as the bride was on her way. She arrived with her father in a magnificent vintage, white Rolls Royce from Cupid Carriages. The service took place in the grand Town Hall. No confetti allowed: guests would need to keep it until they got to the reception.

Yes Martyn - you are married!!! 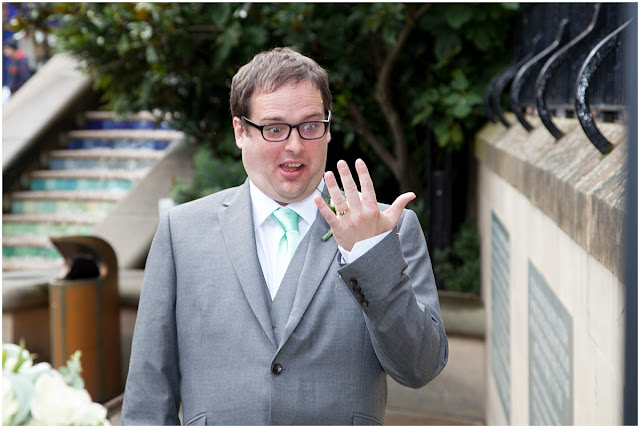 Photos were taken near the fountains with Martyn almost being thrown in them at one point and then into the magnificent Winter Gardens for a few romantic photos. In the city centre it could easily be mistaken for a jungle in Borneo! 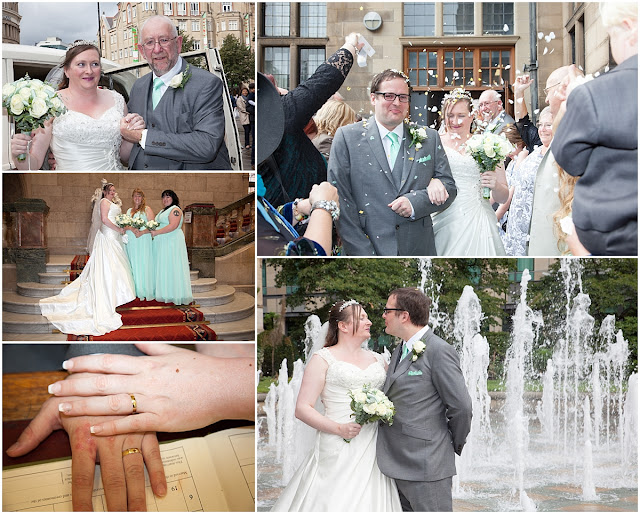 Eventually the couple settled into the Roller with a glass of bubbly to get off to the reception. Martyn’s brother had organised a coach to take the guests to the gorgeous venue, Wood Lane Countryside Centre.

Confetti and fish and chips on arrival from the burger van (did I say they were quirky?)! The guests loved it! They hated the thought of a formal, sit down meal – they wanted to relax, enjoy the whole day and enjoy everyone’s company. We had a few photos and then it was indoors for a few speeches. There were four individual cakes arranged on a stand. They were all iced in mint green to match the bridesmaids’ dresses and the chaps’ ties, waiting to be cut. Kerry’s sister had made them. One vanilla sponge, one chocolate, one peanut butter and one fruit. All vegan. 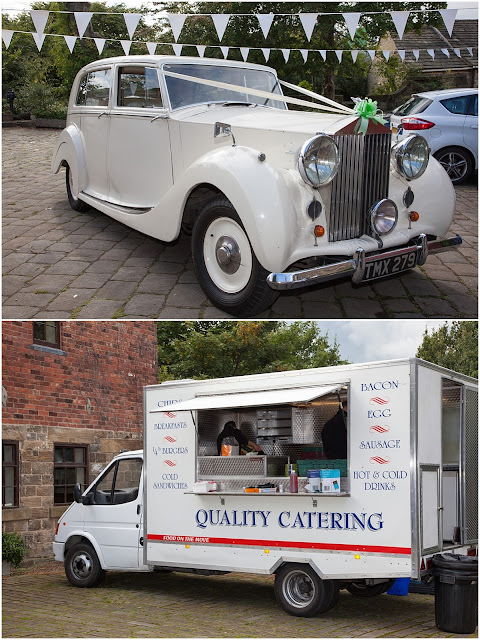 The afternoon was pleasant, enjoying the grounds with a pond and lots of wildflowers Then it was the evening festivities! There was a buffet and a table full of sweets. A friend kindly acted as DJ and provided a good selection of tunes. First dance was one I had not come across before; StrongerWhen You Hold Me by Winter Mountain. 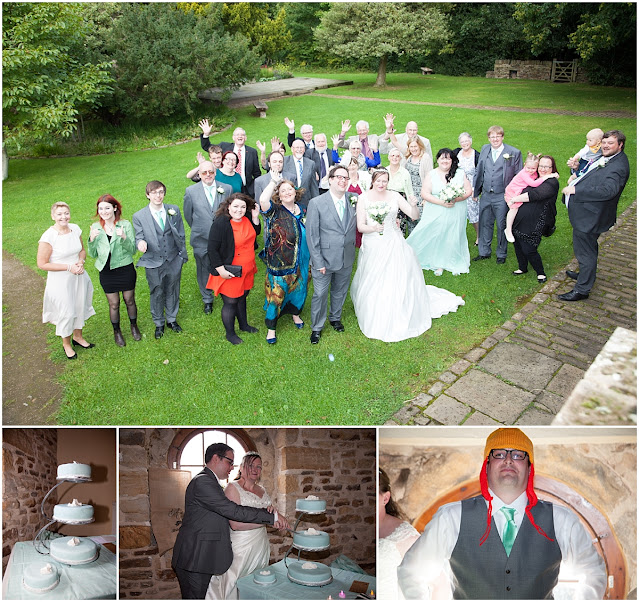 Kerry and Martyn told me it was the best day of their lives. They couldn’t choose a best moment as it was all amazing. Their advice to others is simply to give yourself plenty of time and just enjoy it. I wondered how they found me. They said they enjoyed being photographed! More than they thought they would. Advice to others is to embrace the whole experience and enjoy it. 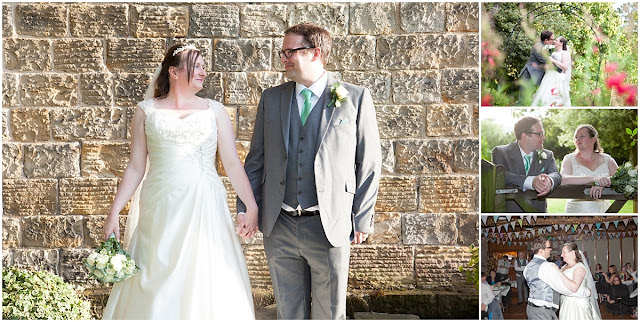 Finally, a honeymoon getaway planned. Kerry had always wanted to visit Italy so a trip to Sorrento was planned. The couple are fascinated with history so would love to see Pompeii, Vesuvius and Herculaneum. We wish them every happiness for the future – a truly lovely couple.